In this post, we will be taking a deep dive into the problems facing the people of Makoko Slum, Lagos Nigeria, a marginalized community.

Lagos, home to a population of 17.5 million is located in southwestern Nigeria. Lagos is a large city that serves as a huge economic, cultural and political center for regional and international commerce and connections. However, Lagos is also faced with environmental issues – slums, crime and informal settlements. 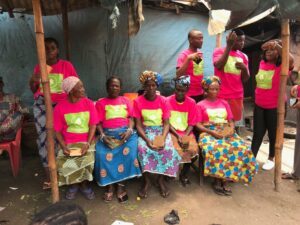 A lot of people migrate to cities like Lagos in search of daily bread but end up suffering unsuitable/intolerable hygiene levels and they are also deprived of basic social amenities. Poverty is also the principal cause of hunger caused by unequal distribution of income and lack of resources most especially in a developing country like Nigeria. In this post we will be focusing on a marginalized community called Makoko Slum Lagos, Nigeria. 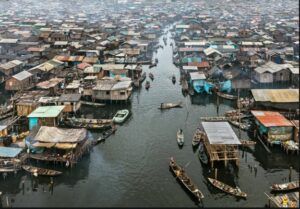 Makoko located on the coast of Mainland Lagos, Nigeria is a marginalized community with half the population on water and half on land. It is believed that its first inhabitants settled here about 150 years ago. Houses on water are built from hardwood, supported by wood stilts driven deep into the waterbed.

Residents can be seen traveling by canoe or over a wooden bridge. No wonder the community is also referred to as the “world’s biggest floating slum.” Majority of the Makoko residents who live on water are the Egun people who relocated from Badagry and Republic of Benin. 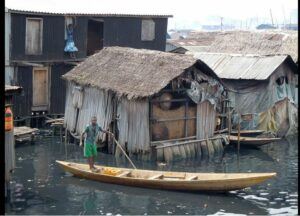 Outsiders may not know this but Makoko is actually divided into six villages laid out on land and water. They are Yanshiwhe, Migbewhe, Adogbo, Oko Agbon, Apollo and Sogunro. The first four are floating villages referred to as “Makoko on water”; the remaining two are on land. The floating villages and those on land are united by the water and this is what they depend on for their livelihood. The major occupation here is fishing.

The lingua franca of the Makoko community is Yoruba language. Other languages spoken in this community are English, French and Egun.

According to an article by hotosm.org it is estimated that the Makoko population is 300,000.  However, the Chief of the village believes the population is much higher and could be estimated at 500,000 or higher. 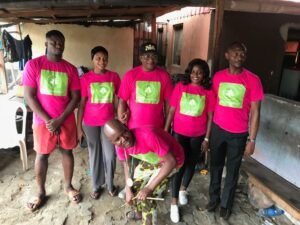 A report from The Chief of the village also estimated that the population has grown exponentially beyond the estimated 500,000 because thousands of people are still making their way to Makoko on a daily basis from other parts of the country. Makoko slum, Lagos Nigeria lacks basic social amenities such as electricity, schools, and healthcare clinics. 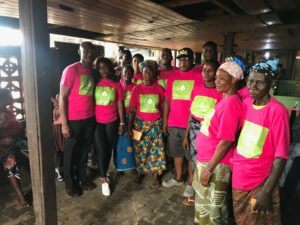 The increasing population growth has out paced the country’s health services and this has resulted in poverty, high unemployment rate and poor health among the poor who live under the poverty line. Hence, slum life is inevitable!

“There is indeed a dire need for global intervention for organizations to create and implement programs so that the health and quality of life of Makoko residents can be improved.”

Residents of Makoko live in one of the unhealthiest marginal communities on the planet. A room in Makoko is occupied by more than 5 people. Malnutrition, Malaria and respiratory diseases are problems that are common to this area.

Personal hygiene is very poor, there is lack of power, clean water, proper garbage and disposal facilities and good drainage. Constant flooding is a major problem here due to blocked drainage and this results in different types of diseases such as malaria, cold and cough, diarrhea.

It is believed that on average thousands of people migrate to Lagos on a weekly basis and this has contributed to unplanned settlements like Makoko slum which has resulted in unemployment, poverty, air, land and water pollution, illiteracy, health related problems and uncontrolled population growth.

There is indeed a dire need for global intervention for organizations to create and implement programs so that the health and quality of life of Makoko residents can be improved.

Although the Makoko community is aware of illness and measures to take, they are limited by lack of financial resources, healthcare, education.

There are many problems facing the vulnerable people in the Makoko community. Little or partial solutions will not be enough and cost effective to improve their lives. Realistic programs will bring about a strategy for sustainable development of the Makoko population and alleviate their pain.

Empowering Women and Girls in Makoko 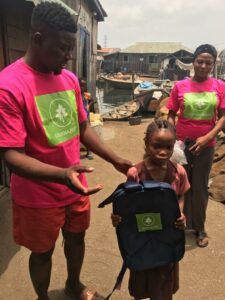 Mannahelp is working on empowering girls and women in the Makoko Slum, Lagos Nigeria. We want to empower women and girls so that they can be confident and have a bright future and that is why we created our “Yes She Can” program to solve the problems of poverty, hunger and gender equality. 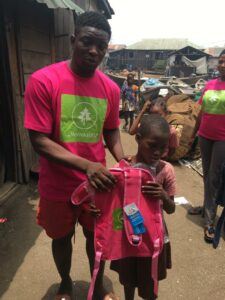 The Yes She Can program is addressing the following:

Education: due to poverty, girls are not able to go to primary or secondary school. Another factor that hinders them is abuse. Some girls in Makoko community who were unable to attend primary school, now have the opportunity to be educated through our program.

Malnutrition: male children are given more attention some homes believe the male child should eat first before the females which results in poor health and malnourishment. Also, most homes can only afford to eat once a day.

Child marriage: young girls under 18 years of age are married off and are expected to be mothers. This puts theirs lives and that of their children’s at risk. This is why our focus is on helping girls and women in this community.

High rates of maternal mortality: Girls that marriage at a very young age experience complications during child birth which puts the lives of mother and baby at risk.

A girl will work to raise the standard of living for herself, family and community if she has enough food, lives in an environment that’s free from gender based violence and also has the opportunity to partake in decisions that affects her life!

We cannot say that a community is developing when women and girls are not empowered. When girls are empowered they are able to take part in making decisions that affect their lives and they are also able to help their families and community.

A girl will work to raise the standard of living for herself, family and community if she has enough food, lives in an environment that’s free from gender based violence and also has the opportunity to partake in decisions that affects her life!

In a community like Makoko, the level of illiteracy is high and more attention is given to boys while girls are regarded as second class. Men hold primary power and dominate leadership roles and control of property.

A lot of thought is not given to education due to financial constraint and many parents believe a girl should be married off. A community that lacks education has serious effects on everyone. The results of lack of education include lack of a voice, unemployment, gender inequality, exploitation and poor health.

Covid 19 and its effect on Makoko 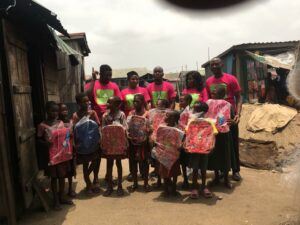 The impact of Covid 19 is being felt in Makoko. Many families in Makoko who were not able to cope before Covid hit are now in dire need of help because Covid 19 has worsened their living conditions. They do not have financial resources to cope with the crisis and a lot say they are facing household food insecurity due to the pandemic.

Makoko homes lack access to safe water, health care and sanitation. Also, large numbers of people occupy tiny spaces and latrines are shared among many households. All of these factors will further lead to outbreaks in such a community.

It is therefore important to make efforts to protect these people who are already at risk knowing that Covid 19 can have a devastating effect on these people and their families.

Now is the time to empower the women and girls in Makoko Slum, Lagos Nigeria, a marginalized community.

A girl that is educated will earn higher income and marry later. She will also have fewer children. Also, they will reinvest the income earned into their families. This will in turn have a ripple effect on the society for many years. Mothers that are educated are well informed about access to healthcare, diseases and measures to prevent them.

Poverty, Hunger and Gender Equality are areas where we can assume high impact based on levels of suffering of girls, women and their families.

The people of Makoko need help and our goal in accordance with United Nation’s Sustainable Development Goals, is to empower the women and girls, lift them out of poverty and end hunger.

Your donation to this cause will go a long way in improving in this community. Click here and make a donation today. Together we can save lives and make the world a better place.

How You can help